As the WiM team gears up for the Sundance Film Festival 2019, we had the chance to hear from Cinematographer, Sandra Valde Hansen about her upcoming TV series, NOW APOCALYPSE. Here’s a sneak speak in advance of Sandra’s appearance at the #WiM Open House panel on January 27th on all things scripts, digital look books and more:

After reading the script a few times, so that my head can really sink into the world of the film, I will go through the script and make a spreadsheet of every scene to begin my note taking process. Once this “administrative” work is done, I will meet with the director to talk about the film, both visually and emotionally. We discuss photos, films, art, music; whatever inspires both the director and I to see where we share a common ground. Time permitting, I will go through every scene with the director and discuss the purpose and emotional trajectory of the scene. From there, I do my own research looking for visual references for every location, scene or period of time that is significant to the trajectory of the film. I separate all my visual references into folders on my computer and from there I put together a digital look book. I present the look book to the director. Once the director signs off, I distribute this look book to all the key visual players: production designer, costume designer and gaffer. I try to sit with each one of them to discuss the look book. It is an essential conversation to have with all of these key crew members, because it allows everyone to be on the same page. This allows for absolute visual harmony among all departments. At the very least, it helps avoid an actor wearing orange, sitting on an orange couch, bathed in orange light.

If there is time and access, I also just love to sit in the space where we are shooting, read the scenes, imagine the scene in my head and watch the light move through the space. I try to do as much as I can to immerse myself into the project.

That is a really hard question, because every project has a different set of visual artists. But generally, I love two photographers, whose styles are polar opposite, but both effectively capture human emotion and tell an entire story in just one image.

Nan Goldin’s very gritty, real and raw photography gives you a look into spaces and people in their most intimate and vulnerable moments. She does this with all available light and sometimes puts herself in her images. She has this amazing ability to capture that one moment, which visualizes the subjects’ thoughts, pains, and longings.

Phillip Lorca Dicorcia also has the ability to capture the emotion and vulnerability of his subjects who are in worlds that seem mundane and everyday. But he heightens this reality, through his lighting and composition, that airs on both the theatrical and the documentary. He has a wonderful ability to use color to heighten the world, but then also speak to the emotions that the subject is feeling.

Tell us about NOW APOCALYPSE and collaborating with Gregg Araki:

Gregg and I have been collaborating together for almost 10 years. Gregg has been making films for a long time and has had over 10 films at Sundance. I shot his last two features, which all debut at Sundance: WHITE BIRD IN A BLIZZARD (2014) with Shailene Woodley and Eva Green and KABOOM (2010) with Thomas Dekker, Haley Bennett and Roxanne Mesquida

NOW APOCALYPSE is our fourth project collaborating together. It’s a 10-episode, half-hour, comedy series on Starz, shot all in Los Angeles, California in 40 days. NOW APOCALYPSE is a surreal, coming-of-age comedy series that follows Ulysses and his friends Carly, Ford and Severine, who are on various quests pursuing love, sex, fame and success. The show explores identity, sexuality and relationships, while navigating the strange and often times bewildering city of Los Angeles. On top of trying to discover his path, Ulysses deals with the premonitions about apocalyptic visions and feeding into the conspiracy theories he has been researching.

The show will have its broadcast premiere on Starz on March 10, 2019. It will have its debut premiere at Sundance 2019 on Tuesday, January 29 at 6pm at the Library Theater.

Because we have worked together on a few projects, Gregg and I do have a visual shorthand. Gregg has a unique visual aesthetic that I’m absolutely drawn to and understand. When we work together, our conversations are short concerning the look of the project. He draws a lot of inspiration from fashion photography and loves vibrant, saturated colors that explode across the screen. Gregg started out editing and shooting everything on his own, so compositionally he knows what he wants. He allows me to play and experiment with lighting hoping that I can push the image to its limits. It truly is inspiring to work with a director who knows what he wants but challenges you to make his vision better.

Tell us about your collaboration and relationship to WiM member, Yvonne Chu? This is my first collaboration with Yvonne Chu, as my “A” camera operator on NOW APOCALYPSE. But even though it was my first time working with Yvonne, by the first week or so, on NOW APOCALYPSE we had established a great rapport. Yvonne, is not only my camera operator, she is also a true friend, which I believe is absolutely necessary to have with your crew. Beyond Yvonne being fantastic at what she does (she is a great handheld operator, by the way) she was always there for me every step of the way. Shooting a show that is 10 episodes on a 40-day schedule, can have its ups and downs. Having people, like Yvonne, to help you get through the downs and celebrate with you on the ups, is one of the many reasons I love filmmaking. Your crew is your family on set.

How did you meet?

Yvonne and I met through a mutual camera assistant we know. I knew in the first few minutes over coffee that this was going to be a great match.

I attribute my grandmother and my mother for getting me into film. My parents worked very long hours – 16 hours a day (both are nurses), so I spent a lot of time with my grandparents. My grandmother took me to my first movie (which sadly I can’t remember). She brought me to every Star Wars film. We cried together in ET. We cheered on all THE GOONIES. And when we weren’t going to the movies, we were always renting movies.

My mother was obsessed with the latest/greatest home audio/video devices. She was setting up the television/VCRs and the stereo systems. She bought a video camera pretty early on in the days of home video, where the camera and recording deck were separate. She was always upgrading the latest new models and she always let me play with it. So at an early age, I was making movies with my mom’s penchant for video cameras. She also bought still cameras and let me discover 35mm still photography.

I discovered cinematography through the beautiful imagery of EMPIRE OF THE SUN, shot by the incomparable Allen Daviau, ASC and directed by Steven Spielberg. I will never forget viewing this film and having just the images resonate so much emotion in me at a very young age. I knew from that moment that I wanted to be able to do that someday. For many years after that and not until applying for film school, did I realize the person responsible for doing that was the cinematographer.

I don’t really have my preferred technicals because every project has different requirements, limitations and scenarios. Cameras are so good right now, that almost any camera out there can produce a wonderful image, if it’s handled right. Lenses are always the one tool in the tool box that helps further the visual language. Picking the right lenses could bring the look of your film to another level. I do always carry my laptop on set with my free copy of DaVinci Resolve. I’m not a colorist, but I use Resolve on a daily basis to view footage, do some minor color adjustments and then send stills to my colorist.

On NOW APOCALYPSE I shot:

Panavision Primos (modified with their signature recipes to create the look that I was going for in NOW APOCALYPSE).

Used my Sony A73 with a Panavised Adapter for quick shots that I would get myself.

Tell us something unusual about yourself:

I have a bit of a photographic memory, which helps with grocery shopping. Because as I’m figuring out my list, I can go through every aisle in my head looking for the things I need.

What other projects should we look out for?

I do have a documentary at Slamdance as well called DESOLATION CENTER. I was the co-DP for the film: https://www.desolationcenter.com/ 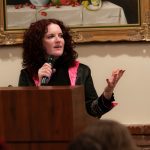 Behind the Camera Lens with Yvonne ChuMember Highlight