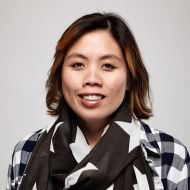 Variety 2019 Artisans Elite Up Next: https://variety.com/gallery/artisans-elite-2019-cinematography-editing-design/sandra-valde-hansen/

Named as one of Variety's 2019 Artisan Elite Up-Next, Valde-Hansen holds an MFA from the American Film Institute. Story is key when Sandra looks for projects to shoot. So she maneuvers through the feature film, television and documentary world lensing the series The L Word: Generation Q for Showtime, the feature, AFTER EVERYTHING starring Maika Monroe and Jeremy Allen White for Good Deed Entertainment and the Showtime Documentary BURN MOTHERFUCKER BURN.

Valde-Hansen worked her way up through the camera department, and was mentored by luminaries such as Steve Poster ASC, Stephen Lighthill ASC, and Nancy Schreiber ASC. Born in Miami, Florida, to a Filipino medical family. She resides in Los Angeles and when she is not shooting is a Cinematography Senior lecturer at AFI.