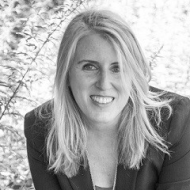 Lauren Flick is native New Yorker who works as a writer, director and producer in television, film and digital media. She has produced long & short-form content for NBC, CBS, AMC, A&E Networks, CNBC and Warner Bros.

While at AMC’s Voom Networks, Lauren developed the original short-form series Keep it Green, which focused on social justice & environmental issues. As the Showrunner on the expanded half-hour episodes, the series ran for 3 seasons and was sold in syndication to 37 countries.

Lauren has written and directed countless short films, and her first feature film, Play it By Ear, starred Academy Award Winner Rita Moreno. Most recently, Lauren has blended her talent for content creation with her passion for politics as she worked on a variety of Democratic initiatives including serving on the board of The Creative Resistance — a group of media-makers who use their talents to further democratic ideals.