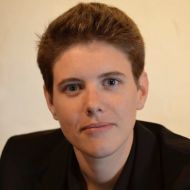 Doriane Ede
Camera
As a freelance Camera operator since 2007, I used to work in French television channels such as FRANCE TV or TF1. I operated on News, Shows, Political Events and World Sport Competitions.
This user account status is Approved

I was born in a ski resort in the french Alps.
My passion for cinematography and photography started very early.
During my second grade I used to give a note and an analysis of each movies I saw. (I remember that Space Jam had a very bad critic by the way, and Mars Attacks an excellent one). During my 10th grade, I co-founded the first French highschool's Television channel. I was shooting and editing reportages and created multicams TV Shows.
I have rapidly understood that my only way to express myself would be by pictures, frames and lights.
The camera is my pen, my voice.
I graduated with honors my Scientific French highschool diploma and then I studied in a film school, in CANNES.
I graduated with honors and then went to Paris, to study Cinematography and Art History at La SORBONNE.