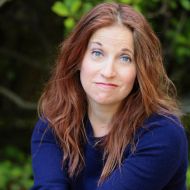 An AWARD-WINNING writer, performer and accomplished Script Supervisor, Caryn Ruby has worked alongside OSCAR and EMMY AWARD-WINNING crew on award-winning projects, including the WOMEN IN MEDIA Camaraderie initiative GRAND PRIZE WINNING FILM “Blood and Glory” which premiered at TRIBECA Film Festival, “Jeffrey,” which was lensed at Lux Machina - the LED stage where THE MANDALORIAN is shot - and “Trees of Peace,” which won TOP PRIZE at the SANTA BARBARA INTERNATIONAL FILM FESTIVAL.

Most recently, her screenplay “Daphne’s Revolt” was awarded FINALIST in the NEW FACES, NEW VOICES festival, SEMIFINALIST in Women In Media’s Cameraderie Act 1 competition, and the comedy sketch she co-wrote and stars in, “Poverty Tourism” premiered at the HOUSTON COMEDY FILM FESTIVAL as a finalist for BEST DARK COMEDY Micro Film.