Hello, and welcome! Thank you for joining us.

I would like to take a moment to thank our sponsors, Greenberg Glusker, Black Magic Design, Band Pro, Zeiss, and Script Pipeline for their generous contributions that make this event a success. I would like to recognize our educational partner, DaVinci Resolve and Production Hub, who powers our online jobs list.

I would also like to thank our volunteers and board of directors, who nurture our organization’s growth with their energy and guidance. But mostly, I’d like to thank our members and allies who make up our community. You are changing how women are seen, hired, and heard.

As an organization, our focus is parity, our mission is balance. Our goal is 40 – 60% women, in every crew position, on every show. And if you accidentally have more than that, we won’t complain. We believe that when women are at parity in the crew, we have less harassment i.e. liability, and better a product with higher return on investment – and statistics bear that out. In fact, a study by Creative Artists Agency and Shift7 released just this week affirms what we have known for a while. Every film that grossed more than $1 billion at the global box office over the last five years also passed the Bechdel Test.

Inclusive stories about women with agency clearly broadens the audience. Everyone wants to see a better looking, more heroic version of themselves on the big, small, and smaller screen. Having better inclusion behind the scenes often translates to better diversity on the screen as well as more interesting and empathetic storytelling.

Casting is indeed behind the camera as well as in front. For years, I worked on projects where I was the only woman on location scout. In order to fix this imbalance, I started Women In Media as an informal networking group in 2010. We relaunched as a non profit in 2017 … yup, just a year and a half ago! ….. and wow, a lot has happened since then. Just two years ago, people were telling us that they couldn’t find women for their crews. We saw a gap between some people’s perception and what we knew to be true, so we relaunched with a passion to make it impossible to say that talented, experienced women couldn’t be found, vetted, and hired.

We’ve discovered that women typically do not have the same straight trajectory that is afforded to many of our male counterparts. We tend to zig and zag in our careers. In order to be seen as excellent, we need to be twice as good to get half the respect and we need to prove it seven different ways till Sunday.

We created the #CrewList – a searchable database where anyone can find women via profiles filled with their professional data. We designed the profiles to combat conscious and unconscious biases that women face every day. We set out to make our value undeniable.

People gravitate to Women In Media because we are are doers. Last January, we started the #HireTheseWomen initiative where we host lunches to introduce keys to women who they can hire for their crew. We get to know each other, we furnish them with the women’s crew list profile links, we tell war stories, and we eat. And women get hired. We can’t tell people who to hire, but we can make introductions in an enjoyable, easy social environment.

Attitudes toward women in the entertainment industry are changing, and changing rapidly after many fits and starts, as well as years of backsliding statistics, and not without a loving push into the 21st century. In 2018 we saw Rachel Morrison make history as the first woman to be nominated for an Academy Award in cinematography. 2018. Isn’t that crazy? In 2019, let’s encourage our voting friends to remember the ladies. 52% in every department. We are here and we are doing excellent work.

In fact, 2018 was a banner year for women making movies and t.v. shows. There were so many incredible stories released theatrically, on tv, and at festival. And people started talking in a serious way about the need for more women, not just above the line, but also in the crew, which is remarkable, because for 40 years, the general wisdom has been that if we only had more women above the line, it would trickle down to hiring more women department heads and they in turn would hire more women in the crew. Since the problem is systemic and wide spread, the solution has to be that we, people of all genders and ethnicities, must proactively hire inclusively and intersectionally from above, and push from below.

I’ll let you in on a secret. We have a somewhat ambitious plan to achieve parity in 5 years. We expect it will take another 5 – 10 years beyond that to make it a habit. We are asking for your help in this endeavor. We don’t know where the world will be in the next 5 days, much less the next 5 years, but everyone in this room can gently guide our industry in the right direction. To start, we would like everyone to take the #ParityInAction Pledge, which you can sign on our website. The tenants are simple and fair and most, if not all of you are already doing it.

I pledge to interview at parity with commitment to hire inclusively above and below the line.

I will actively seek out women to hire from outside my circle and other resources if necessary.

I will recommend women I respect to others in a position to hire.

I will pay equitably and create an atmosphere of respect for all cast and crew.

Together, we will move the needle.

Today we celebrate not just how we are progressing as an industry, but the achievements of four extraordinary women who have consistently been the example of excellence we can all point to. They are widely respected, but have long careers ahead of them. We are so fortunate to have them, and their toastmasters with us, all of whom are legendary in their own right.
For example, toast master Plummy Tucker began her career as an assistant editor on multiple Peter Weir films such as Dead Poet’s Society and also a number of John Sayle’s films, including Passion Fish working her way up to associate editor and then editor.

While in post on The Secret Life of Roan Inish, Sayles hired Karyn Kusama to be his assistant, hence she and Plummy met. When financing came through for Karyn’s feature debut, Sundance 2000 Grand Jury Prize-winner, Girlfight, she asked Plummy to edit the film and the two have been collaborating ever since. Please welcome Plummy Tucker.

Through Effie T Brown’s company, Duly Noted Inc., she has produced several critically acclaimed and award winning projects including Stranger Inside, Jane Campion’s In the Cut, Real Women Have Curves, Everyday People, Rocket Science and the Sundance hit Dear White People. She solidified her Shero status in 2015, when she joined Matt Damon and Ben Affleck as Producer and Mentor in the controversial reboot of Project Greenlight. Please give it up for Effie!

Johnny Simmons’s work ranges from Snoop Dogg videos, to the acclaimed documentary Dark Girls, to Dog With a Blog and Nicky, Ricky, Dicky, and Dawn. There couldn’t be more of a range. Johnny has helped launch the careers of many young ambitious people in the camera department. In his copious free time, he Co-Chairs the Vision Committee at the American Society of Cinematographers. Please join me in welcoming Johnny Simmons.

Nate Moore is Vice President of Development and Production at Marvel Studios. Nate develops scripts from existing Marvel publishing properties for feature films that you’ve all seen. Once developed, he is instrumental in finding filmmakers to direct the films, and is involved in hand-picking cast and crew as well as overseeing the projects through post and into merchandising. I’d say he has a very good eye for talent. Congratulations to him and Camille on Black Panther’s recent Golden Globe nomination! Please welcome Nate Moore. 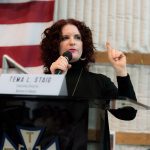