Up Close and Personal with Daytime Emmy Winner: Allison Vanore

Today, we’re very excited to share this candid Q&A with Women In Media’s Secretary/Treasurer, Allison Vanore. We are thrilled to have her join the #WiM executive team and help us take #WiM to the next level. Allison is a five time Daytime Emmy award winning Producer and has already made an impact at #WiM as she helped kick off the CAMERAderie Initiative last week. Read on to learn more about her background: Congratulations! You were nominated for 8 Emmy Awards for your work with After Forever. Tell us about how you got involved with the project:

Just this past weekend we WON 5 Emmy Awards! We won for Outstanding Writing, Directing, Lead Actor, Supporting Actress and the Emmy I’ve personally won, along with our two Executive Producers, is Outstanding Digital Drama Series. It’s a real honor to be recognized for an independent series about 50-ish gay men, people who we rarely see on TV and in films, dealing with universal themes such as love, loss, and navigating life after loss. Kevin Spirtas was referred to me back in 2016 after I produced the film “Daddy” and we happen to both get nominated for Emmys that year on other projects. So it’s just wonderful and kismet that we are back at the Emmys this year with huge wins for the show we’re producing together.

We are thrilled to have you join the Women In Media Executive Board as Secretary-Treasurer! Tell us a bit about this decision.

I’m a doer so I’m excited to get more involved with the goals and tasks that Women in Media has before us. I’ve watched Executive Director, Tema Staig move mountains over the past 8+ years for women in this industry and I’m happy to shoulder some of that weight and do my part.

You have hit the ground running! Tell us about Women In Media’s CAMERAderie Initiative. 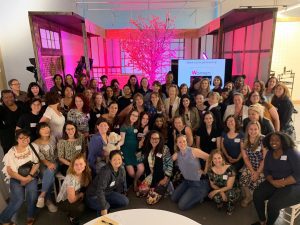 I’m really excited about the CAMERAderie Initiative that we launched this week. We’re bringing Women in Media members with great scripts together with above the line and below the line crew to produce three short films this summer. The initiative is complete with mentors, professional workshops, and a ton of donated resources from our favorite vendors in Los Angeles. It’s going to be a great way not only for our membership to sharpen their skills and learn from some of the best, but they’ll be able to walk away with a show piece to take to festivals and have a chance to win resources to put towards a feature film or pilot shoot in their near future. We want to give everyone the opportunity to take this experience and make that next, sometimes hard, step: getting a feature film off the ground. In my opinion, it takes too long for women in the industry to get their first feature made, and even a second or a third feature is hard to achieve in the current climate – but we’re changing that. We’re bringing that opportunity to our membership to help make it a common reality.

How did you get your start in film direction & production?

I’ve always worked and played in this medium and so it only made sense to go to school for it and move out West to pursue the dream. I started out working for a boutique design firm managing projects in design, digital/interactive media, and even interior design. I learned a great deal about working in a creative industry, working for clients, brands, and entertainment studios. From there I went out and pursued producing in both film and series. So far, it’s been a wild and relatively successful ride! Who were your filmmaking idols that you looked up to?

When I was little it was Speilberg. I love action, sci-fi, drama and some of my favorites are Close Encounters, Back to the Future, Indiana Jones. As I became more interested in pursuing film, I expanded what I watched, I found inspiration in Sally Potter, Penny Marshall, Lars Von Trier, David Fincher, Alan Ball, and Christopher Nolan.

What is your favorite movie genre and why?

I love the combination of drama and science fiction because you can tell a story so removed from our known world but that parallels our reality enough that we can examine our humanity in a non-judgemental way. We can explore technology, our morals, huge societal issues without being so direct that you turn people off from the ideas. Plus I have always loved science, space, planetary exploration, time travel… the edge of the universe is always calling my name.

Tell us about your experience as an educator, and how that’s affected your work.

I never thought about teaching and the opportunity fell into my lap. What I found was that my desire to help people and be a resource was perfectly matched with teaching. It’s what I do as a producer and a person in the industry. I’m always referring others, recommending vendors, guiding newbies. I enjoyed it a lot. If I could teach without the bureaucracy… let’s call it independent teaching… I’d do more of it! You’ve jumped into the wild world of podcasting. Tell us about the choice to use this medium to tell your stories.

I just love telling stories. I began listening to podcasts like most of us did – with “Serial.” Now I obsessively listen to over 20 true crime and social justice podcasts. As I dove deeper into the medium, I realized we have an opportunity, just like with digital/streaming video content, to distribute new, unique and powerful stories to the world. It’s the same reason I pursued producing web series 10 years ago. My husband and I now produce two non-fiction podcasts and we’re developing two fiction podcasts. I’m really excited because I’m writing one and will also direct. I recently held a table read with 17 actors and it was amazing to hear the world I created come to life. And it’s a story about women taking control of their own destiny despite impossible odds – and that’s something I’m really passionate about.